When the modern ‘western’ world thinks about Tuberculosis today, there are not too many fears about their own infection. While it has been nearly eradicated in Western Europe and North America due to our advanced medicine, the bacteria has never left more remote areas including East Asia and Sub-Saharan Africa.

This bacteria remains a global threat in that production of new antibacterial drugs are not being produced at fast enough rates to keep up with TB. Today nearly 1.5 million die from TB per year and with the rising rates of multi-drug resistant and even totally drug-resistant tuberculosis cases, a fast and effective diagnostic process is essential to prevent further transmission. 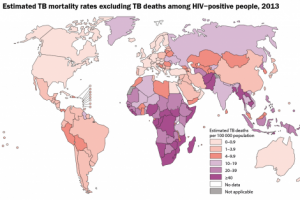 In my project, I was given 26 tryptic peptides that had previously been found in clinical samples of TB. I created a simulated human blood plasma using Bovine Serum Albumin and injected all 26 of the synthetic peptides. After creating a dilution series of 1,000 fmol , 100 fmol, 10 fmol, and 1 fmol of each peptide in solution. I ran each solution in with a run time of 90 minutes. After analyzing the retention time on Skyline of each peptide I then edited my transition list to perform another run in triplicate using Selected Reaction Monitoring. Using this data I isolated seven peptides that had a limit of detection at 1 fMol and had a coefficient of variance below 20% in triplicate.

Ranked Peptides in Respect To Limit of Detection 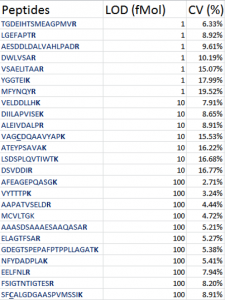 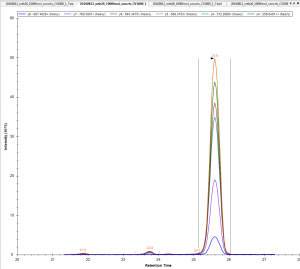 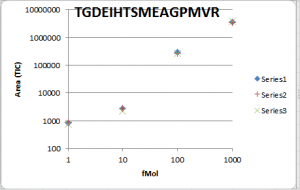 In future research, promising peptides will be tested as targets for antibodies that would be found in a clinical sample. Peptides that activate antibodies will create a paper-based ELISA which would only require a sample from an infected person and a reagent to interact with the antibodies already attached to the paper. The combination would then produce a precipitate if the antibody detected any of the peptides in the sample, declaring the patient TB positive.  It would cost about $1 per test and give an accurate diagnosis after 30 min.