Background
Studies suggest that prehistoric humans dating back to 4000 BC were affected by tuberculosis. The disease currently affects one-third of the global population, and is caused by the species of bacteria Mycobacterium tuberculosis. Symptoms include chronic coughing, bloody sputum, fevers, night sweats, and weight loss.

M. tuberculosis bacteria are small, nonmotile, obligate aerobes. Infection occurs when a person inhales contaminated air and the bacteria reach his or her lungs. It takes fewer than 10 bacteria to cause an infection, so tuberculosis infection rates remain high with 8.7 million new cases of tuberculosis in 2012.

M. tuberculosis poses a unique problem because of its waxy mycolic acid coating, making the bacteria unsusceptible to many existing antibiotics like penicillin. Current treatment methods involve the use of multiple drugs over a lengthy course of treatment, since the use of only one drug results in rapid development of drug resistance. In cases of active tuberculosis, the standard course of treatment involves the use of all four first-line drugs: isoniazid, rifampin, ethambutol, and pyrazinamide. In cases of MDR-TB and XDR-TB, the injectable second-line drugs, amikacin, kanamycin, and capreomycin are used.

The Problem
A significant concern today is the increasing prevalence of drug resistant forms of tuberculosis. This problem is attributed to patients missing medications or failing to complete the full treatment regimen, allowing for the progression of the disease and the development of drug resistant tuberculosis. The WHO has attempted to combat this problem by internationally recommending the use of Directly Observed Treatment Short-course (DOTS). Patients visit a local healthcare facility or have a healthcare worker come to their home so that they can take their medication the presence of a professional. This process is advantageous because it not only ensures that the medication is taken correctly, but helps maintain the patient’s motivation during the lengthy treatment process.

However, irregular or incomplete treatment still occurs despite these efforts for a variety of reasons. The biggest problem seems to be the intensity and length of current treatment methods, which are quickly becoming outdated. Even the standard short course treatment for tuberculosis involves the use of four drugs over a period of 6 months. The frequency in which patients are advised to take pills and the duration of the regimen results in many patients ceasing treatment earlier than advised. Furthermore, treatment can become expensive, especially in cases of drug resistant tuberculosis. While the four first-line drugs are relatively affordable, treating MDR and XDR-TB requires the use of more expensive, injectable second-line drugs. The added financial burden further increases the chances of patients ending treatment prematurely. Finally, the drugs used against tuberculosis can have significant side effects, including hepatotoxicity, or chemically driven liver damage. The use of not one but multiple drugs simultaneously makes liver damage a huge concern in those being treated for tuberculosis. Other adverse effects include the reduction in efficacy of birth control pills, inflammation, joint pains, and even red-green color blindness, discouraging patients from completing their treatment regimens. These inconsistencies in taking the proper medications at the correct intervals and for the allotted time allow M. tuberculosis to develop resistance, exacerbating the tuberculosis pandemic. 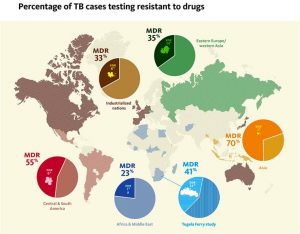 The Bill and Melinda Gates foundation is helping combat the issue of drug resistant tuberculosis by funding research to create shorter, simpler, and cheaper new drugs for tuberculosis. Several new drugs are under preclinical and clinical development that show promise in killing both drug susceptible and drug resistant forms of tuberculosis when used in conjunction with other drugs.

The graph below shows the melting curves of the dihydofolate reductase (DHFR) peptide CEVTEVDIGLPR treated with an inhibitor in comparison to a control setup. This preliminary data is a good example of the differences in the denaturing of the peptide due to the presence of an inhibitor. 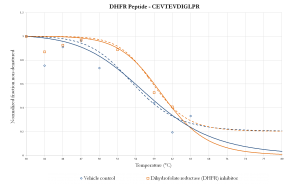 Mass spectrometry is allowing for the discovery of drug protein targets, making it an important, state-of-the-art tool in the fight against tuberculosis, especially in conjunction with thermal proteome profiling. Throughout my senior year, I will use this combination of techniques to continue this research.