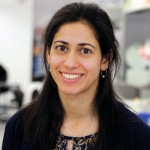 Could you discuss a bit of the theory behind your research?
Well I’d like to start out by saying that unlike computational biologists, wet lab biology is not very theoretical; it is hypothesis driven. We focus on the way we go about designing a scientific question and then making a testable hypothesis. This also includes keeping up with the literature that is being published constantly and learning from the hypotheses of others.

What is the main focus of your lab’s research?
In my lab we focus mostly on the innate immune system, that being the immune response in the body before a pathogen is detected. There are instances in which the body can overcompensate in its immune response without a detectable foreign entity and become auto-inflammatory. There is a series of cell signaling that causes auto-inflammation that we wish we knew more about. The signals are brought about by cell stress and there have been 23 proteins isolated involved in this stress that can alter the signals, leading to auto-inflammation and immunodeficiency diseases. By detecting the alterations in the body early on, we could treat people with developing autoimmune deficiencies before their symptoms get too severe and that is what my lab wants to make possible.

Could you think of any weaknesses in your research?
We don’t really have any weaknesses, of course science is limited by technology so it would be great to get data at a lower cost, to be able to view individual cells better and so on but as far as conceptual research we are fine. In the end of course there is a matter of convenience with the pace of the research that can be challenging to keep up with. People are dying and competing research is published every day and working at a pace for clinical testing is important. There is also the matter of funding and the need for more people doing research but no inherent weakness to our lab.

What is your protocol for interns in your lab and how do you help them grow as developing researchers?
Clearly interns need to develop a new skill set because research is not something that they do everyday. I try to firstly, have them develop a strong technological base. Secondly, I match them to a smaller part of a larger project that their mentor is working on and let them develop a sense of ownership of their work. Lastly, I encourage them to ‘research’ on their own in a sense by keeping abreast to the literature that is becoming available at such fast rates.

Have you ever had an unsuccessful project?
There are some unsuccessful aspects to science such as major challenges in projects, but no I don’t think I’ve ever been involved in an unsuccessful project. Perseverance and the conviction to keep going is essential. If your scientific question is sound then there will be a way to accomplish your goal, though there will be many challenges along the way. You learn from your failed hypothesis and adjust it according to the data someone else may have published and constantly modify your hypothesis until you prevail.

What do you think is the cutting edge research happening in your field currently?
I think that we are pretty much the edge; dissecting single cell responses as opposed to population response is a newly developed and important way of drug testing because if only half of your population responds to drug A then drug A cannot be very efficient. By studying cell specific responses in the context of autoimmune diseases we can begin to detect which signals set off which responses – it’s immensely complex. By this we could also effectively detect when the body enters the diseased state and begin a treatment faster.