What is the basis of the gas vesicle phenotype in a newly mutated (gas vesicle +) strain of S9 halobacterium (gas vesicle -)? Has this new mutant simply reverted back to the wild-type state (gas vesicle +) or does it contain an entirely new mutation? 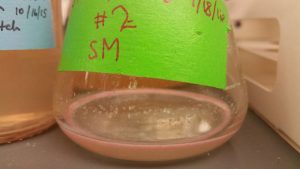 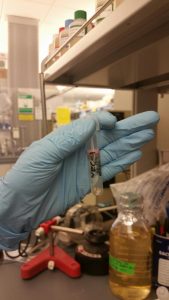 Why Study this Mutant?

Because the genetic processing methods of halobacterium are similar to those of humans, it is important that we study mutations (both induced and spontaneous) in the genome of halobacterium so that we can better understand different mechanisms for possible mutations, changes in phenotypes, and genetic disorderrs in human DNA.

We inoculated three samples of the mutant culture, along with three control samples of NRC-1, and placed them in a shaking-tray incubator at 37°C. We then measured the samples’ optical densities around twice a day using a spectrophotometer at 600 nm (nanometers) for 14 days. 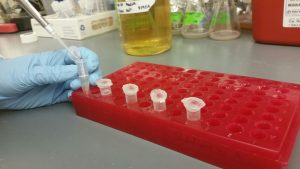 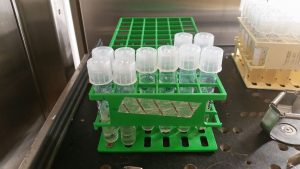 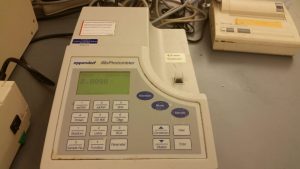 The hardest part of this project was getting the mutant culture to grow. It had been sitting on the bench devoid of nutrients for almost two years, so reviving the culture was a long and tedious process. It took around 212 hours, or 9 days, just for the culture to “wake up.”

After plating our mutant samples, we discovered that there were two different colored colonies growing on our plates. There were bright pink colonies, which made up the majority of the plates, and there were dark red colonies, which were outnumbered by the pink colonies by about 50:1. We have inoculated ten samples of each color, and when the colonies reach a substantial size, we will be able to see which colonies of halobacterium float to the top of liquid media (indicating the gas vesicle + phenotype) and which sink to the bottom (indicating a gas vesicle – phenotype). 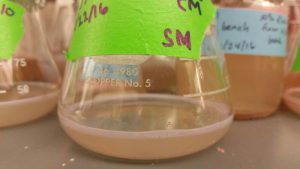 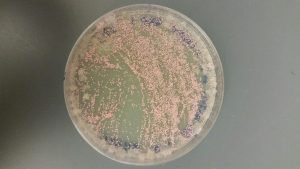 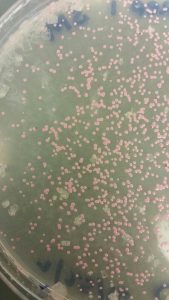 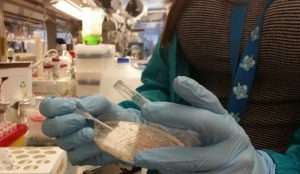 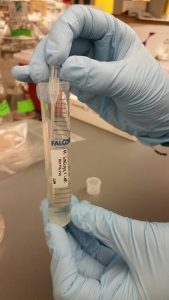 Based on our research regarding the phenotype of the S9 strain, we predict that the dark red colonies of halobacterium will sink to the bottom of the liquid media and prove to contain the gas vesicle – gene. We believe that the dark red colonies are S9 microbes that did not mutate along with the rest of the culture. So, we think that the pink colonies will contain the gas vesicle + gene and float to the top of the liquid media, exhibiting the phenotype of our mutant.

Moving forward, we are going to perform DNA sequencing on the strand(s) of DNA in our mutant that contain the possibly mutated gene. This will tell us if the mutant is simply a revertant of the S9 strain back to wild-type state, or if it is an entirely new mutation unrelated to the wild type.