Background
Mycobacterium tuberculosis (MTB) is a pathogenic bacterium that causes tuberculosis, which affects about one-third of the world’s population. Mycobacterium smegmatis is a non-pathogenic bacterium that is used in research related to MTB, as it has many similarities, yet a relatively fast doubling time. M. smegmatis is approximately 3.0-5.0 um and is the model organism for mycobacterial species. M. smegmatis shares the same cell wall structure as MTB and other mycobacterial species.

Experiment
M. smegmatis is closely related to MTB and studying its growth can help further the research of MTB. The mutant used in this experiment, knockout 4718, has a transcription factor that was originally identified from the MTB regulatory network model. MSMEG_4718 regulates genes involved in the synthesis of cell wall lipids. MSMEG_4718 was deleted from M. smegmatis and is predicted to controls 10 genes that are likely involved in the metabolism of branched-chain amino acids, specifically leucine, valine and isoleucine. With these amino acids in mind I ran experiments with both the wild type and KO to see if there were differences in the growth rate. 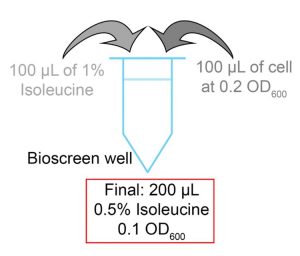 A population of Mycobacterium smegmatis wild type and KO_4718  was grown overnight at 37°C in 7H9GAT. On the follwoing day, pipette culture and media using 2X technique to setup bioscreen plate (See diagram for example). Set up triplicates of  7H9+ADC media for each amino acid (leucine, valine and isoleucine) concentration of 0.5%, 0.25% and 0.13%. Monitor the growth via optical density 600 with BioscreenC at 37°C and continuous, low shaking.

After one run of amino acid conditions, the growth curves of the wt and KO_4718 looked very similar under each condition. Upon further analysis with R, which calculated growth rate, the difference was very insignificant with some results having outliers.

Conclusion
There is very little difference between the growth rate of M. smegmatis wild type and KO_4718 under isoleucine, leucine and valine conditions. Further analysis and another trial may help in determining if the slight difference is significant.