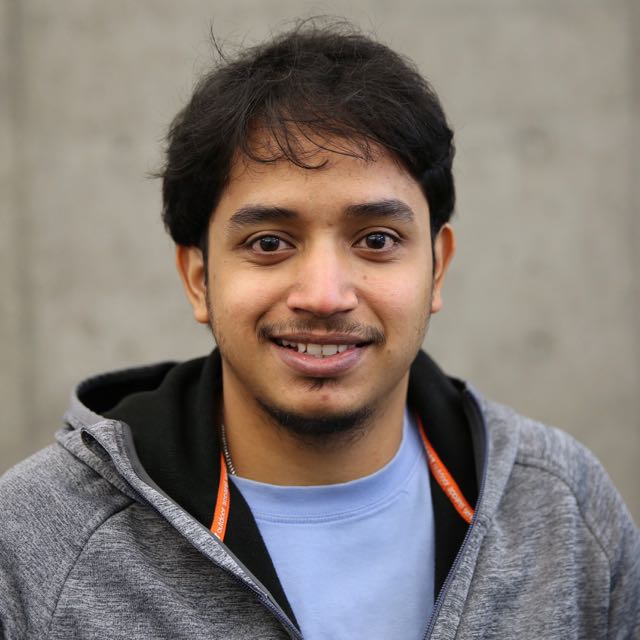 Why did you choose a career in science?

I was always interested in science for a long time. Solving problems, puzzles, I was just really interested in these. Science was just a natural path to go, I like doing other things too, but I wanted to give science a shot before I jumped into other interests because it’s easy to do science and then move on to another field than to be in another field and then come back to science. I think this is a challenge because science moves so fast and it’s really hard to catch up if you’re not in it for a long time.

What is your current project and position here at ISB?

I’m a Postdoc and I’ve been here for one and a half years now. I am working on the TB team, and drug tolerance in Mycobacterium tuberculosis.

What are your plans for the short-term and long-term future in terms of your career?

One thing is I want to contribute to science as much as I can as a Postdoc. Once you move on from being a Postdoc it’s very hard to do the actual lab work as a scientist. You get engaged in grant writing or you have a lot of projects on your hands, so you become more of a manager. As an upper-level scientist, you think of a project but you don’t really get a chance to do it yourself. As a Postdoc, however, it’s really nice because you have just graduated from graduate school, your Ph.D. program, and you have all the experience that you need to complete a project. And because we don’t have much responsibility to get the funding or grants ourselves, it leaves us time to do science. My future plan would be to, once I achieve my postdoc goals, to go into industrial research.

How do you balance your work life and personal life?

I still haven’t gotten out of my graduate school habits. One of them is arranging my life to consist of activities around working in the lab. Especially in a biology lab, where there’s so much going on, and nothing really works all the time. You spend a lot of time in the lab, and in grad school, I developed the habit of organizing my life around lab work. Because of that, I really liked being in the lab, it wasn’t like I was caged in it,  I would go out when I had incubations running, I spent time outside in nice weather, I would catch a movie, have dinner and spend time with friends. So I’m still in the habit here. I go out have a nice time, but if work requires me to come back like on the weekend or after hours, I’m glad to be back. Living close by to the laboratory helps a lot for this type of lifestyle.

Have you learned anything that you didn’t expect about yourself while at ISB?

I’ve learned a lot of presentation skills, how to talk about our projects and science. Communication is vital in science.

When you were in high school what did you imagine for yourself? Is that different from what you actually do now?

I never thought I would be a scientist or a researcher when I was in high school. And I probably didn’t have any goals as such, but I liked science a lot. I wanted to join the army, but that didn’t happen, so I chose science.

What advice would you give to a high school student for a career in science?

Get interested in it. Try to ask your own questions because what happens is if you go to an internship or for graduate school because most of it now is fast-paced the process of scientific inquiry becomes structured. Science is all about asking interesting questions, and answers anyone with the right training can find them, but what matters is question for our answers. My advice is if you want to pursue a career in science, try to get in the habit of getting interested and generating the interest yourself not looking for your peers to say “Ok, this is the project, this is what you SHOULD be interested in and what you should work on” because at some point that is going to get a bit…boring. So if you want to be happy, because like I said, there is ninety-five percent failure and five percent success rate in experiments, you want to be happy with it. And if you are really interested in the question that you’re asking, it’s going to make life easier, if not, at least enjoyable.

What’s your background and how has that impacted your career choice?

For my bachelor’s I studied biochemistry, genetics, and biotechnology. It really helped me a lot to think about biology because I studied every basic concept in biology. But my major interest was in biochemistry a lot because at the end of the day all it came down to was molecules and how it interacts. I was also interested in genetics, as in evolution and phenotypic traits, how do they get selected, all of those things. So in my master’s I took biochemistry and in my grad school, I joined a lab which specializes in molecular parasitology because I was interested in infectious diseases and parasites. But other than biochemistry or molecular biology I did a lot of computational biology, simulations, generated algorithms to find and annotate genes. In the process, I learned a lot of machine learning and coding, multivariate and statistical modeling. By the time I finished the Ph.D., I was proficient in computational and experimental biology. Because of that, I wanted to get into systems biology which is a mix of molecular biology and computational analysis so I ended up here.

Was there a specific experience that you had that drew you to science?

I used to visit a science museum that was next to where I lived. India is a hot country and the science museum was one of the few places that had AC, I spend hours in it escaping the heat. They had a planetarium and lots of science experiments that kids could easily understand, and in a lucky draw, I won a microscope over there. I saw a lot of small stuff, cells, to insect morphology and I started doing small experiments and that’s what generated the interest.

What is your favorite part of the day to day work? What is the worst part?

It has to be lab work and experiments. If it works, I have the joy of saying I designed an experiment to understand nature. If it works in the lab then this must be how are works in nature. Doing that is one of the best parts. The worst part is when it doesn’t work, and you have to go do it over and over again.

What are some of the biggest challenges you see in the scientific community?

One is definitely asking the right question. Translation is also the biggest challenge because we do a lot of things in the lab, but at the end of the day, where does it end up, does it even really have a use in this society or are we just writing it on a paper. So that’s our biggest challenge, to see that what we do here is used by others.

What has been the most rewarding thing as a scientist?

It has to be meeting other people because as a scientist, I know it could be the same in other fields, but you meet different people from different backgrounds, different thinking and that’s what is rewarding to me. When you go to a scientific conference, everyone is speaking science. And when you’re not discussing science you can discuss other things, and that’s what I enjoy.

What would you change about the science community if you could?

Increase transparency and reduce the habit of blindly linking good work with big names. Like if you’re reading an article from a big journal, like Nature or Science, one would believe that research on contrary to one published in a smaller journal. So if we reduce bias we don’t really put weight on the name itself, it doesn’t matter who did the research, what matters the most is content of the study.

What did you find the most challenging when pursuing a science degree?

The requirement to keep learning new things. How much ever you learn it’s never enough. You could be an expert on a small little instrument that you took many years to learn about, and someday it’s going to be useless, and you need to do the same process with another instrument or another technique, and that’s the path. Catching up, you’ll need to do a lot of catching up. Also failures, you learn to deal with it as you go.

Do you have any regrets?

No, because regrets are useless, you can’t really change what happened.

What has been the most important thing you’ve learned while working here at ISB?

At this stage, I’ve stopped learning more about science, and I am focused on implementing what I’ve learned from my grad school years.

Have you had any influential mentors here?

A lot of people in different aspects. If I’m thinking about a certain aspect of my project, I would look into someone who has worked on it to learn something new. I believe in learning something from everyone.