Soon, there will be a new high school course entitled “Systems Medicine” that students, mainly juniors and seniors, will be able to take for CTE credit. Our task this summer was to help develop activities and lab work connecting Halobacterium and E-coli to human disease that would be accessible to students in the classroom. The course will emphasize P4 Medicine, an ongoing project at ISB that revolutionizes healthcare through Personal, Dense, Dynamic Data clouds and individualized n=1 studies, which will allow further research into curing chronic disease.

In order to develop convincing curriculum for students, we worked with researchers, teachers, and healthcare professionals. We started our work by developing a case study following a family whose acceptance of P4 Healthcare leads to their greater physical and emotional wellness. It emphasizes the fact that P4 Healthcare is not only beneficial to the patient in the moment, but leads to greater awareness for generations to come, which through patient involvement can predict and prevent chronic disease. To make sure the biology of our case study was as real as possible, we split into three groups to research diabetes, colon cancer, and stress and anxiety, each of which a member of the family has to deal with.

The diabetes research was done by a visiting teacher, to ensure the mother’s type 2 diabetes diagnosis was scientifically accurate. 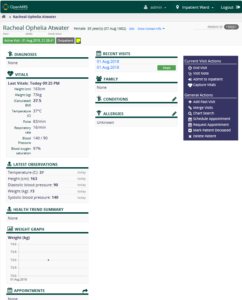 The colon cancer research we did went in depth into the stages, treatment plans, and mortality rates, as well as the genetic causes. The father in our case study was a survivor of stage iiic colon cancer, which in his case, was hereditary. This was important because the son became more at risk, and was likely to develop cancer later in life if he didn’t take actionable steps to prevent it.  Hereditary Nonpolyposis Colorectal Cancer gets passed from parents to children, but people can greatly reduce their risk by maintaining a healthy diet and exercising frequently. Therefore, it was plausible that the son could change his lifestyle to avoid the cancer his father experienced. It was important to have an accurate understanding of the signs and symptoms as well as the treatment plan so we could create plausible interactions between the father and his medical team, and accurately represent both group’s experiences.

The research done for stress and anxiety was specifically targeted for teenagers. We wanted to make the emotion and feelings the son felt as real as possible. To achieve this accuracy we researched what factors can lead an adolescent to feel stress and  have anxiety, especially at times where they got bad news. It was discovered that adolescent anxiety could be caused by a combination of biological and psychological factors and can affect a person at different levels. Two examples are a person can be born with a general vulnerability or be exposed to an environment that promotes anxiety. Stress in adolescents can be caused by negative events in their life. The son receives news that his dad is diagnosed with cancer, and he has no choice but to worry, not only for his dad’s sake but for his own too. Having these events happen helps us understand what the son might feel during times of distress. 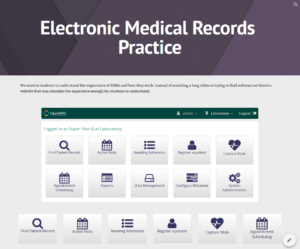 We got introduced to EMR’s and learned how helpful they can be. A patient has a profile that a physician can access. The physician can quickly add any information they deem relevant at any time and schedule an appointment for any day that works. We were tasked with creating a simulation a real EMR. It was decided that we were going to create a google site to emulate the EMR software, but after searching for an actual EMR that could be used we found a website that already simulates the real software. Our website is to show anyone what the practice EMR can do. It walks through how to create a patient profile, search for patients, schedule appointments, and add any information useful. For example who the patient they’re related too, their vitals, and age.

We also developed a classroom activity where students could research and model the effects of stress and anxiety. Students could research biological and environmental factors of anxiety and  teach their findings to the class through a skit or presentation. Anxiety is often an overlooked topic in science curriculum, and yet it’s one of the most common problems teenagers face. Understanding the biology and brain chemistry of anxiety could help students recognize or manage stress, an important skill for high schoolers. We wanted to emphasize anxiety in this curriculum because of its relevance to students and relationship to a person’s overall wellness.

As our first lab this summer, we grew Halobacteria in different levels of oxygen, mimicking one of the labs in another SEE curriculum module. We grew four different groups of Halo in different oxygen levels, combining two different volumes and two different amounts of agitation. The Halo in this experiment usually have access to light as they grow, but the incubators we used didn’t have light, so our results were different than the results students following the module would get. This experiment helped us grow comfortable handling Halobacteria for our following experiments, where we attempted to replicate human disease using the Halo as our model organism.

To evaluate whether previous Halobacterium labs are applicable for the new systems medicine curriculum.

To determine if Halobacterium NRC-1 growing in different levels of oxygen will develop visible phenotypic changes and differences in growth, illustrating the effects of environment on human health. 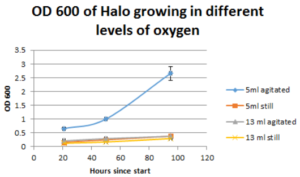 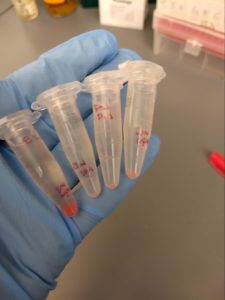 To model antibiotic resistance in bacterial infections by demonstrating the resilience of E. coli against low doses of ampicillin.

All plates were incubated at 37°C overnight and colony numbers were recorded the next day. 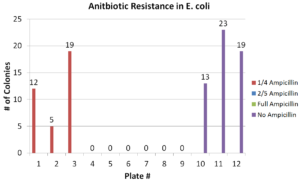 If we had more time, it would have been interesting to transfer the colonies from the ¼ ampicillin plate to a liquid culture, and streak that culture onto a plate with a greater concentration of ampicillin. Our wild type E-coli didn’t grow on the ⅖ ampicillin, but the colonies that overcame the ¼ ampicillin would have a greater resistance to the antibiotic and might successfully grow in greater and greater concentrations. This would be useful in demonstrating the importance of taking a full dose of antibiotics to completely get rid of a bacterial infection to students.

Halobacterium and diabetes as a model

To determine if over-feeding Halobacterium with amino acids will lead to a decline in their growth, modeling the effects of type 2 diabetes in humans

All Halo cultures were taken from the same wild type NRC-1 liquid culture, which we had been growing for 3 weeks. The culture originated from a single colony. 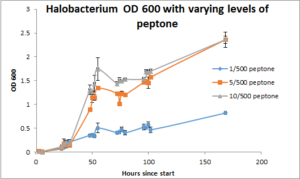 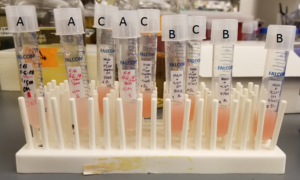 As we expected, the Halo with access to few amino acids in the 1/500 peptone solution had a similar growth rate to the others at the beginning, but as they began to run out of peptone their growth slowed and significantly dropped below the other samples. Originally, we believe the high peptone would put the Halo under stress and stunt their growth, but as it turns out, the Halo with added peptone grew generally faster and never dropped below the level of the control. They began to even out towards the end of the week long period, but by then we had concluded that the experiment had run too long to feasibly do in a classroom. We investigated substituting the amino acids for simple sugars, but learned that Halobacteria does not grow on sugars, despite having the genes to catabolize glucose.

Although measuring the Halo’s growth wasn’t successful in demonstrating the negative effects of type 2 diabetes, we considered the fact that the amount of peptone each Halo had been exposed to might have resulted in a difference in their gene expression. Although we didn’t have enough time to run a full RNAseq and analyze the data to determine if the gene expressions differed, we extracted the RNA from our samples to prepare for an RNAseq to be done later. If students are able to send their sample off to be analyzed for gene expression and peptone levels change that gene expression, they could see how something as simple as protein intake could have a larger effect on their entire system.

We used a mirVanaTM  miRNA isolation kit and protocol to isolate our RNA. We then proceeded with a DNAse treatment to further purify our samples, and used the bioanalyzer to test if our samples were pure enough to be used in RNAseq. For our full procedure, click the “Halobacterium RNA extraction” link below. We then stored our samples in -80℃ for when they will be sequenced and analyzed later. 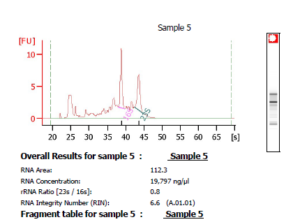 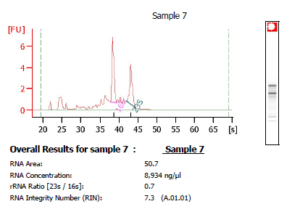 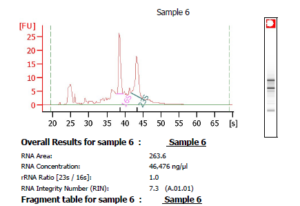 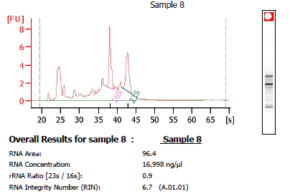 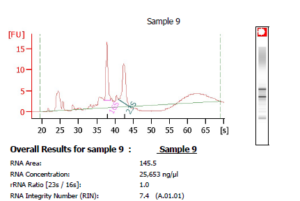 The samples that were put in the bioanalyzer were the samples of RNA before it was DNAse treated, so it wasn’t the purest sample we had. Our replicate of the 1/500 was left out, as we had used all the RNA in our DNase treatment. Still, our RNA Integrity Numbers (out of 10), were high, ranging from 6.6 to 7.4, indicating that we had little DNA and protein contamination. Samples with a RIN of above 5 are usually pure enough to use in RNAseq, so we were successful in extracting pure RNA.