The innate immune system is the body’s first line of defense against pathogens i.e it provides an immediate response against pathogenic invasion. The NOD-like receptors (NLRs) are a family of cytosolic sensors involved in the innate immune response.  There are 22 NLRs identified in humans. Genome-wide association studies (GWAS) have identified multiple risk alleles encompassing NLR genes for a multitude of diseases, suggesting a diverse range of functions for this family of proteins. While their potential role in human disease has been identified, the biological functions of many NLR proteins remain unknown. Recent studies have shown that increased expression can mimic the activated state of the NLR. The goal of our project was to to develop an over-expression system to mimic ligand activation and to ultimately explore the function of 4 poorly characterized NLRs: NLRX1, NLRP7, NLRP9, and NLRP12.

We developed a drug inducible expression system which will allow us to tightly regulate NLR expression with tetracycline/doxacycline.

We used a multi-step cloning process to create this drug inducible lentiviral expression system. This involved restriction-enzyme based ligation, and gateway cloning. We were able to successfully insert the TRE (tetracycline) promoter and NLR of interest into the lentiviral destination vector, pSLIK_Venus. 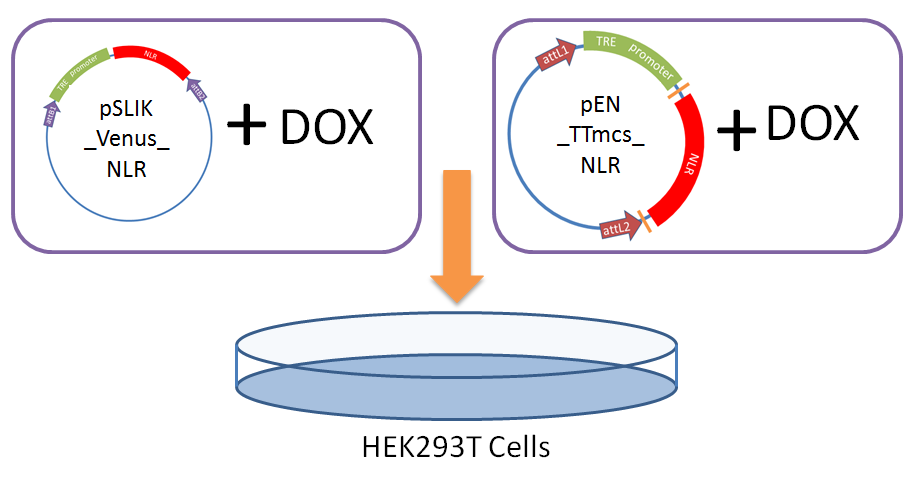 We performed a transient transfection of a human cell line with our entry vector and lentiviral vector to test if our engineered constructs were able to stably express the NLRs (without excessive protein degradation) and if expression is drug inducible.

Using a western blot, we found that our constructs are able to stably express the NLRs, and that  overexpression is drug inducible. However, the pSLIK_NLRP7 shows that there is some leaky NLR expression in the absence of DOX. We hypothesize that this is because the lentivirus is only transiently transfected, and transduction will lead to a tight (non leaky) expression.

The lentiviral pSLIK constructs will be utilized to create stable human cell lines with controllable NLR expression. Then using transcriptomics and proteomics, the signaling pathways and functions of these NLRs can be discovered. Understanding the molecular characteristics of these NLRs will create a better understanding of their roles in associated diseases, and could potentially inform future treatments.