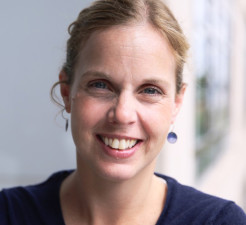 What got you into science?

I think  I was always interested in biology and math. Anytime  I said that people always said that I should become a doctor, and in the community, I lived in, South West Michigan, if you were interested in biology and were good at math then it was a given that you would become a doctor. It wasn’t until my next door neighbor moved in, and he was a Ph.D. chemist working at Pfizer Pharmaceuticals doing research, and  I realized that you could do science and not have to be a doctor. I didn’t think to be a doctor as the way I wanted to go, and knowing that I would be in a high-stress environment constantly dealing with patients lives was kind of nerve-wracking. I realized that I could just do science as a full-time job, and when  I went to college as an undergrad, I took biology and mainly science classes and majored in microbiology.

So we took various classes on microbiology, definitely in terms of infectious diseases and not just bacteria, but we learned about virus and fungi; things that generally cause diseases. But you also have to take molecular and cellular biology course and all the standard science courses. What  I got exposed to as well as microbiology and in the context of the environment, was how microbes are crucial in the environment and especially in water chemistry. I took a course on limnology which is the study of freshwater, and I found it really interesting and I think one of the many reasons  I took a path down that study was because my instructor was extremely passionate about the subject. After finishing my undergrad, I applied to grad schools in water chemistry and environmental engineering. A lot of people also go into immunology because they have a perspective on bacteria but you start gaining on the host side as well.

I loved it. It was a really big school and  I knew that it was what I wanted. I wanted to go to a big school that had a lot of diversity in terms of the student population.  I grew up in a town with a smaller population and there just wasn’t much diversity in terms of a lot of things. Also, with a larger institution like that, you have a lot more available to you. You have research going at the university that brings in big NIH grants, and you can get exposed to that class of science and research, purely based on the types of grants that they can pull in and it gives them the resources for that kind of science. During the summer  I worked in multiple labs and did summer REUs at the University of Vermont and we isolated blood factors while doing x-ray crystallography on them, and it was a really fun experience for me.

Was it competitive to get a research position during your undergrad?

In my experience it was pretty easy,  I think it was just because I needed the experience doing research. As you get older and people are knocking on your doors, you know that’s what they need to get to where they want to be. That’s just how it’s done, and in my experience, it wasn’t difficult, but you do have to work hard and actually be there; making time because if you have that experience on your resume that will put you way above others who just don’t have that hands-on background.  I would say it’s very valuable, even if it does take time because it pays off if you want to stay in science long term.

Were the universities you went to different from one another?

No, I think it was similar, both institutions are doing really high-quality research. It is also hard for me to comment because  I was an undergrad at one and a grad student at another so I can’t compare. But in my experiences in labs at both institutions, they were pretty similar.

What have been the projects that you’ve worked on are the proudest of?

I think it is what I work on now. In my Ph.D. I worked on discovering new microbes that would delay the development of resistance of bacteria. They were targeted against things that were involved in homologous recombination and changes in the genetics of bacteria. In that context, a lot of these targets were broadly applicable to multiple types of bacteria, but they were never effective in TB. So we stayed away from working with TB because of how difficult it was, but when  I came to ISB I didn’t really know I would be working on a TB project, but at the time we had just gotten a grant with the CIDR so Nitin told me that I might have been working on that. Over time I learned that TB is extremely challenging but it’s also very interesting. I don’t think that I would want to work on anything else at this point. I would study TB whether it’s here or somewhere else, but I think this is where I belong.

How did you come to ISB?

After I finished my Ph.D., I was looking for a postdoc knowing that I still needed to expand my skill set and especially wanted to learn some of the computational skill in modeling that ISB is really great at and how it could be applied to drug discovery in particular. Looking at the faculty here and their research projects, I contacted Nitin and talked to him about how I could contribute to his work and the rest is history.

There are definitely some restrictions in terms of what you can take in and things you can take out because everything needs to be autoclaved or you need to spray it down with XL TB which is a chemical that can kill TB, and this chemical cannot be applied to computers because it will ruin the devices. So a lot of the things that went in could not necessarily come out. You have to wear a full suit, double gloves, the whole deal, but I have to say in the BSL-3 and the way that was already set up when I joined, that it was very important that we maintain it very clean and organized. So that is one thing that I do appreciate in that space is that everything must be maintained very clean and the white noise makes it kind of peaceful to go inside and focus. It also forces you to be really organized because you can’t be going in and out of there, so you have to think of everything you need before you actually go in.

What is some advice for high school students wanting to pursue a career in science?

One is definitely getting the experience in the lab, but also try to do labs in other departments to see what you are truly interested in. No lab does the same thing and it’s good to pick up different skills and experiences. I would also encourage you to talk to graduate students in the lab, whether in the labs you’re working in or not, so you can hear about their path there too. Something I like to mention too is that statistics is really valuable and if there is any biostatistics course those can be really helpful as well. In science, we use statistics more and more, and now there is more biology focused statistics classes that would be way helpful in that aspect.

What are your career goals?

We get asked that a lot and I feel like it is okay to say “I don’t know” because it’s good to explore things and you can tell them that you’re interested in science or medicine, but you don’t have to know exactly what you’re going to do later on in life. I still feel like I am exploring. I really like what I do and I have a really good position, but I am at a point where I have to make a decision about making and working in my own lab and try it on my own. It’s exciting because I would get to direct things more, but then it also comes with a lot of stress and scariness because it would be my job to bring in the money and pay the people in my lab. I would love to do it here,  but I don’t know if that’s possible so it depends on the positions open for the work I would be doing. That is another thing in science is that you won’t really be able to decide where you are going to live because the research you are interested in can be anywhere. Going to grad school a lot of it depends on the PI that you are going to work with is in California versus in Washington. An alternative in academia is going into a biotech company because you can still do research in the lab and they seem to be clustered in certain cities. Science jobs are a little more restricted in terms of where you can live.

Do you have any hobbies?

We applied for permits to go hiking in Mount Rainier, and its kind of like a lottery system, so we got them after applying to several. Hiking and backpacking are one of those things that I really enjoy doing in my free time in the summer. In the winter I get out there a little bit but its not as fun, but I do some skiing.

How do you keep a work/life balance?

It is a struggle sometimes, but I feel like over time I’m getting better at it. When I’m here I focus and get things done so when I leave I’m not thinking about it and I feel comfortable with the work that I did. It’s also that I like my work so it doesn’t feel that bad if I have to come in on the weekends to finish some work. A lot of it is self-motivation too; after putting in hours for a grant proposal and it might not get accepted, then you have to self-motivate yourself to keep working hard. It’s good to get a sense of the responsibilities and expectations of working in each lab because it can take up a lot of time.

Do you have a favorite book?

I wish I had more time to read, but unfortunately, I fall asleep really fast when I read at night, but I am currently reading a book called ‘Salvage the bones’. I haven’t read it in a while, but one of my favorite books is called ‘The Count of Monte Cristo’ and I really enjoyed it.