In 2014 alone, the United States consumed 6.95 billion barrels of petroleum products. That is an average of 19.05 million barrels a day.  Unfortunately, of this large number only 5% are biofuels[1]. Limited resources and other externalities of producing corn and soybean make it difficult to fully rely solely on plant based biofuels. So what should we do? The answer to this riddle, might just be microalgae. Microalgae utilize less resources that humans depend religiously upon, and still emit less carbon than other biofuels. 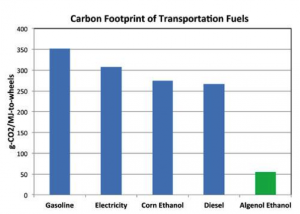 Compared to other fuels, microalgae biofuels have a lower carbon footprint.

Microalgae biofuels have a better carbon footprint than other biofuels. Currently, CO2 levels have been steadily increasing, harming the environment. Algal biofuels is mostly carbon neutral. According to Algenol, a company focused  in the production of microalgae, using photobioreactors for microalgae produces a lower carbon footprint than that of corn biodiesel[2]. Also, just like other biofuels, microalgae is capable of recycling CO2 emissions. The University of Kentucky Center’s microalgae farm is grown by utilizing byproducts from a coal fired power plant. Thus, all of the microalgae’s CO2 is taken from the gaseous waste of the factory[3]. The gas being diverted may be very minuscule; however, it shows that microalgae  can make a significant stand in reducing and preventing the presence of more CO2 in the atmosphere.

Microalgae biofuel provide a higher production yield than other biofuels despite using less fresh water and food, resources necessary to human survival.  In 2000 over 90% of the U.S. corn crop went to feed people and livestock[4], with less than 5% used to produce ethanol. However in 2013 alone, only 52% was produced for food and livestock and a staggering over 40% went to ethanol production[5].  This increase of corn for ethanol production decreases the amount of food available for the growing population. Despite this increase in ethanol production, corn only produces about 328 gallons of corn biofuel per acre[6]. Even soybean production only yields about 60 gallons of oil per acre[7]. Compared to microalgae biodiesel that production per acre is not much. Microalgae grows rapidly and does not have a specific growing season; thus, it can be harvested multiple times a year. This creates the  possibility for microalgae to produce 1200 gallons of biofuel per acre per year[8].  In addition, algal biodiesel is considered to be a a third generation biofuel. This means it does not come from a feedstock used for human dietary consumption; therefore it isn’t as limited in supply as corn and it does not displace food crops for fuel. Other biofuels aside from algae need freshwater to thrive, which is a limited resource for production. On the other hand, algae can grow in waste and salt water, and it only takes about a third of the water in comparison to soybean biofuel[9]. 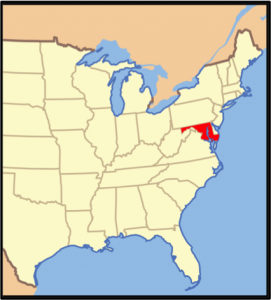 Replacing all the diesel in the U.S. for soy biodiesel would take half of United States. Using microalgae biodiesel, it would only take a surface area slightly larger than Maryland. Source: Scientific American

Microalgae can grow in factories, ponds, and bioreactors. In other food crops, land is very limited for farming.  In United States only 16.8% of land is arable and available for annual harvest. Of this percent of land, numerous crops including soybean and corn are  grown for food[10]. Aside from food this percentage is also shared with the crop growth for biofuels. With already limited space, algae is a better alternative because it can grow on land not suited for agriculture. Also, because of microalgae’s high lipid/biomass yield, it needs less land to produce the same amount of biofuel compared to corn and soybean. According to chief executive of Aurora Biofuels, a Berkeley, California based private firm that specializes in algae oil technology, Matt Caspari claims “Replacing all the diesel in the U.S. with soy biodiesel would take half the landmass of U.S. to grow [the] soybeans[11].” On the other hand, the Federal Department of Energy estimates that if algae fuel replaced all the petroleum fuel in the United states, it would require 15,000 square miles, a few thousand miles larger than Maryland[12]. Thus compared to other biofuels, microalgae provides a higher production rate with the development of photobioreactors.

The nascent of microalgae biofuel is necessary to provide a better alternative to not only oil, but biofuels.  With a rising population, and the depletion of many resources it is important to find ways to help the environment for growing energy demands. We need to maintain the environment for the assurance of keeping future generations happy.

[12] “Now That the Ethanol Enthusiasm Bubble has Burst, is there Hope for Other Biofuels?,” Scientific American, 1 Aug 2015, <http://www.scientificamerican.com/article/progress-on-biofuels/>.