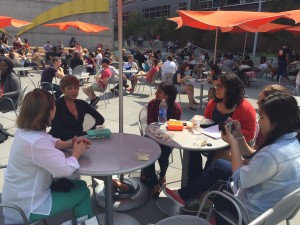 Since age nine, Dr. Monica Orellana has known she wanted to become a scientist. She is curious, driven, intelligent, and has a diverse and interesting background. Dr. Orellana was born in Chile and spent much of her childhood there. Her father was an engineer and her mother was a gym teacher who also did physical therapy research. In addition to speaking Spanish, Dr. Orellana learned French in high school and later took physics and math classes in French!

Dr. Orellana received an undergraduate degree and a master’s degree in zoology at the Universidad de Concepción, a university in Chile similar to that of the University of Washington. However, after, she left and came to the United States to further her studies. She recalls it being difficult to leave Chile. One thing she noticed when she came to the US was that few strangers automatically said hello. In contrast, in Chile she recalls strangers being much friendlier. She remembers this creating a difficult and lonely adjustment. However, she concluded that in the US, once people got to know you, they were friendly and nice.

Dr. Orellana has dedicated her research to oceans and algae. She looks at the micro gels secreted by algae. Dr. Orellana chose to research algae because she sees how important they are. She also believes that everything, even seemingly opposite things, are connected. For example, she discovered that algae affect the formation of clouds!

A future goal of her research is to include trace budgets into the things she is discovering. Right now, scientists know many of the processes that are happening in the ocean, but there is a lack of quantifiable data attached to it. She knows this is a long and difficult project, is determined to keep studying!

Dr. Orellana encouraged us to be inquisitive, talk to people, and follow our passions!