Scientists Model a Genome’s Every Move 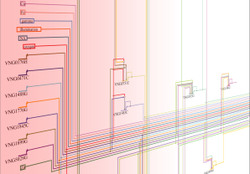 Programmers have long known that with computers, garbage in equals garbage out, but predicting life’s responses to inputs has remained far less certain.

Now, scientists working to improve toxic waste eating microbes have taken one more step towards understanding how to program cells into biological machines. Researchers have created a model for an organism that accurately predicts the bacterium’s genetic responses to environmental stresses like radiation and heat, or garbage.

“Once we understand how these organisms function, we can wire them to give us solutions to our problems,” said Nitin Baliga, a researcher at the Institute for Systems Biology.

Using microbes to do humanity’s dirty work is not a new idea. The pioneering bioremediation work of Geoge Robinson stretches back to the 1960s. But recent advances in genetically repurposing organisms or building them from scratch via synthetic biology are creating a whole new buzz around the idea that microbes can be turned into living machines. Synthetic biology, in particular, has drawn attention recently because of its success in generating organisms that some think could solve the energy crisis. A wide variety of companies are trying to create organisms that produce biofuels at much higher yields than corn-based ethanol. 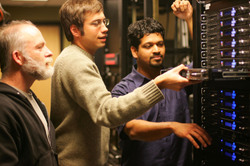 The scientists’ model of the model of the salt-loving Halobacterium salinarum will allow them to fine-tune the organism for the difficult job of cleaning up toxic waste. The research resulted in a model that can be visualized much as Internet network data is now, as in the picture at the top.

“We visualize entities, say genes, as circles, and they are connected to one another with lines. Those connections represent functional relationships we call edges,” said Baliga. “What’s exciting is that when the model comes up, it tells you if you engineer one part of the network, what the rest of the network would do.”

Richard Bonneau, a professor at NYU who co-authored the paper, noted that the researchers have been able to use these models to predict exactly what happens when they put their bacterium into different types of environments.

“We can take the organism and change the oxygen in its environment to a different level,” said Bonneau. “Then we take some datapoints, plug them into model and say, “I think, “10 minutes from now, the microarray will look like this.”

The researchers anticipate that a wide variety of environmental problems could be solved using the tools that extremophile organisms have evolved to survive in tough living conditions.

Bonneau said that their species of bacteria showed particular promise for bioremediation, which drew Department of Energy funding, because of properties that the microbe evolved in its home environment.

“This bug can tolerate salt and it can tolerate radiation,” Bonneau said. “Synthetic biology is the next step for us.”

The researchers say that building a human-purposed Halobacterium will be easier for the them than those without a model of the organism.

The researchers know which “modules” are sensitive and which can be tinkered with, which will make the process more efficient, said Baliga.

The work appears as the cover story of the December 28th edition of the journal Cell.

Bonneau also said that their work should encourage researchers who might be discouraged by the complexity of biological systems.

The modularity of biological system also means that their techniques could be applied to organisms that are far too complex to wholly model, like humans.

“If you want a complete computational mathematical description of even a mouse, you’d need pretty significant technological leaps,” said Baliga. “But a model could be generated for a cancer type to answer many different types of questions.”