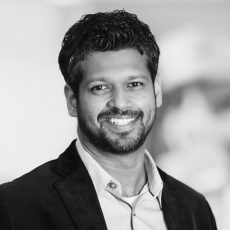 Nitin Baliga develops predictive models of biological networks that catalyze strategies for personalized medicine, and a sustainable environment. Dr. Baliga is also actively engaged in HS education, bringing innovative inquiry-based curriculum on current science conceps throughout the United States. His contributions to HS education have been recognized internationally and have won awards including the Alvin J. Thompson award. As a Professor at the Institute for Systems Biology, he was one of the founding members, and currently serves as the Director and Senior Vice President.

Dr. Baliga did his early schooling in Mumbai, India, where he received a B.Sc. in Microbiology (1992) from Ruia College within the Mumbai University system. In 1992, Dr. Baliga entered a national competition and won the highly coveted Central Government of India sponsored Department of Biotechnology studentship, which supported his graduate studies in Marine Biotechnology at Goa University. After getting a M.Sc. in Marine Biotechnology in 1994, Dr. Baliga won the prestigious Council for Scientific and Industrial Research fellowship through another Central Government of

India-sponsored national competition. After completing his Ph.D. in Microbiology in 2000 at the University of Massachusetts at Amherst, Dr. Baliga moved to Seattle for postdoctoral training with Dr. Leroy Hood at the Institute for Systems Biology.

In 2007, Dr. Baliga published a landmark paper1 that demonstrated for the first time that it is possible to accurately predict how an organism would respond to a new environment. This discovery was made possible by a suite of technologies2-5, experimental strategies6-11 and computational tools12-19 that Dr. Baliga and his team developed to reverse engineer the complete regulatory network of a free

living organism. This study uncovered the theory and fundamental principles that underlie the evolution and predictability of biological responses1,6,20,21. Applying this approach to environmental issues, Dr. Baliga has discovered how some extremophiles might explore life in a new environment6,22,23, revised a >5 decade old “operon” paradigm of gene regulation in prokaryotes24,25, discovered

diurnal anticipatory behavior in archaea26, uncovered the role of programmed cell death in unicellular chlorophytes27, elucidated how cells maintain copper ions at a safe concentration28 and discovered the role of RNases in adaptation to rapid environmental changes.

Together with collaborators at the University of Washington, and the Lawrence Berkeley Laboratories, he is now elucidating the biological networks underlying social interactions and fuel production by microbes.

Dr. Baliga has also expanded his research program to complex human disease to elucidate dysfunctional networks in cancer29 and the basis for latency in TB infections30. His work has identified a core set of miRNAs responsible for disease-characteristic oncogenic signatures across multiple cancers16,29,31. The predictive and actionable network models of disease have important implications for drug target discovery, drug repositioning, and combinatorial therapeutics. Dr. Baliga’s work has been published in top international journals including Cell, Science and Nature, he has been invited to the Google SciFoo Camp, and has been profiled by The Scientist, Genome Web, Wired magazine, Genetic Engineering News, Ars Technica, Xconomy, and Nature Methods, among many others. Research in Dr. Baliga’s laboratory has been supported by the National Science Foundation, National Institutes of Health, NASA, Department of Energy, and the Department of Defense. He is the Section Editor of BMC Systems Biology, and Nature Scientific Data serves on scientific advisory boards of numerous academic and industrial organizations, and been instrumental in research program planning for the NSF and DOE.

Dr. Baliga has also made transformative contributions to high school education. He founded the Systems Science Education Experiences program that has offered internship opportunities to dozens of high school students of disadvantaged backgrounds. This program has developed science curriculum modules to bring current science concepts and practices to high schools. Five modules developed in this program are in use across all 50 states in the US and across 144 countries worldwide.