In addition to being an icon in the world of science, Dr. Leroy Hood is the President and Co-Founder of ISB. He is known for popularizing the idea of systems thinking and bringing it to the forefront in the scientific community. Dr. Hood studied biology and chemistry as an undergraduate at the California Institute of Technology before completing graduate school in two and a half years through an accelerated program at Johns Hopkins University. Subsequently, he returned to the California Institute of Technology and earned degrees in biochemistry and molecular biology.

Dr. Hood began his research in immunology but soon realized many fundamental questions were being avoided because the answers were considered too complex. In the early 80’s he began thinking about how a systems approach would be helpful in understanding genomes, but was unable to follow up on his ideas due to the lack of technology that was available to process large amounts of data. Dr. Hood became further interested in systems thinking when he attended the first meeting of the Human Genome Project in 1985. He knew that sequencing the human genome would provide a master list of all the genes in the human, but that this information could not go far without a thorough understanding of the interactions between the parts. Systems thinking would be crucial in comprehending the influence of these genes.

As one of the founders of systems medicine, the systems approach to disease, Dr. Hood explains that it integrates 3 concepts; tracking disease chains in families, finding more effective methods of diagnosis, and the stratification of disease. P4 Medicine (for Predictive, Preventive, Personalized, and Participatory) combines systems medicine, the ability to analyze large data sets and patient-driven social networks to focus on the wellness of an individual. In ten years, Dr. Hood predicts that patients will be “surrounded by a cloud of billions of data points” concerning their own health.

Dr. Hood believes that it is extremely important for scientists to have a cross-disciplinary background in everything from statistics to software, as well as the flexibility to step out of their comfort zone to learn new concepts. Scientists must have the ability, he says, to “learn to think in ways that are unbounded”. Above all, Dr. Hood believes scientists must be able to communicate with others and speak in plain English to the general public.

Though Dr. Hood has seen many interns come and go, he seemed as willing as ever to offer his advice to us. He encourages us to pursue that which really interests us, and to be honest with ourselves about what that might be. He says that a scientist’s productivity is often shaped like a bell curve over time. To prevent this, he suggests changing fields in a big way every so often, so we continue learning and can reignite our curiosity.

He says of science “only do it if it really excites you”. 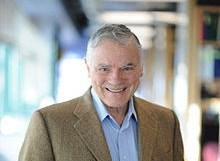 Disclaimer:
Any opinions, findings, and conclusions or recommendations expressed in this material are those of the author(s)
and do not necessarily reflect the views of the National Science Foundation.
Copyright © 2023, Baliga Lab High School Interns.