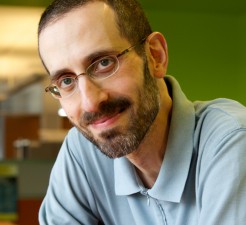 Growing up in Argentina, I remember seeing an issue of “Investigación y Ciencia” – the Spanish edition of Scientific American – with a computer-rendered 3D model of a DNA molecule on its cover. That image made something click in me – suddenly, Biology was transformed from something very intriguing but unknowable, into something that is computable.

How did you come to ISB?

Since my high school, Colegio Nacional de Buenos Aires was directly affiliated with the University of Buenos Aires, this was the obvious place to go for studying Biology. I talked with people that were studying and working there and they painted a very grim picture of an academic career there. It looked really bad. Entirely by coincidence, a cousin of my mother studying in Israel, came back to Argentina to visit his family and told us about studying in Israel. I pursued this path and did my bachelors in biology and biochemistry at the Technion. After a couple of years in the army, I did my master’s and Ph.D. in computational biology at the Weizmann Institute. When I was finishing my Ph.D., I was invited to come to visit Seattle by a Weizmann graduate who was finishing his Ph.D. when I started mine. He had been working with Lee Hood for some time and told me that Lee was starting “something I had to see” – referring to ISB of course. I came to Seattle to interview and loved the place at first sight. I was also deeply impressed with the people, so it was an obvious decision.

What are the best parts of your jobs?

We are very privileged to be paid to do such an interesting job. We can come up with new ideas, analyze amazing data either from here or other places, and discuss other people’s ideas as well. That way we can actually discover things and make an impact.

Have you ever found it challenging to learn computer coding?

I learned to program before I started doing anything in biology. When I was 12 or 13, I started programming basic things. Computers back then were advanced toys, and I think it was an advantage for people like me to learn programming back then. Our first computer came with some games pre-installed. One could interrupt their execution and look at the code to learn, and it was totally possible for a kid to create programs of the same level of complexity, from scratch. For example, I wanted graphics drawing software but there were none, so I wrote my own. That is how I started building algorithms and for me, it became second nature.

What are some of the projects you’ve done that you are proud of?

Again in the sense of developing algorithms, when I came to ISB my main project for quite a while was to create a new method of discovering genes in the genome. That is, given a chunk of genomic sequence, where are the genes? Every single method today for taking sequences and finding the genes are based on two main ideas. One is if to recognize specific patterns like splice sites, and reconstructing the structure of the gene. The second idea is to compare the sequence to a growing database of known sequences of genes. Instead, we developed a method that can identify which regions of the genome are more likely to be transcribed and in which direction. Whenever there is transcription along the genome, the physical activity of transcribing the DNA can have certain effects. One idea is that if the transcription machinery encounters an error in the DNA, it has to stop and recruit a separate machinery that repairs that error, and the outcome of the correction depends on the direction of the transcription. Another idea is that copies of transposable elements ‘jumping’ into the genome can have different effects depending on their orientation. Just by looking at statistics we can get a sense of the direction the regions are being transcribed in and the types of segments that they have. That was essentially my first project here.

How do you balance your work/home life?

When people say they need to ‘balance’ their work and life, it kind of carries this sense that the work they are doing is something they would rather not do, and it should not overtake their life. But we are privileged here to be able to do work that we actually love. Much of the time I spend here is in interactions with other people. When I go home if I have an idea, I’m happy to develop it. Some of ‘life’ happens here, some of ‘work’ happens at home. There’s no sharp divide, but an integration.

Do you have a favorite book(s)?

I read large amounts of science fiction. There are some science fiction writers that are really brilliant. One that I appreciate is Frank Herbert. I don’t read as much as I would like, but then again I am constantly reading stuff.

Do you have a favorite animal?

I have a very strong affinity with cats. Right now, we don’t have a pet at home, but there are lots of squirrels outside and it’s fun getting to interact with them.